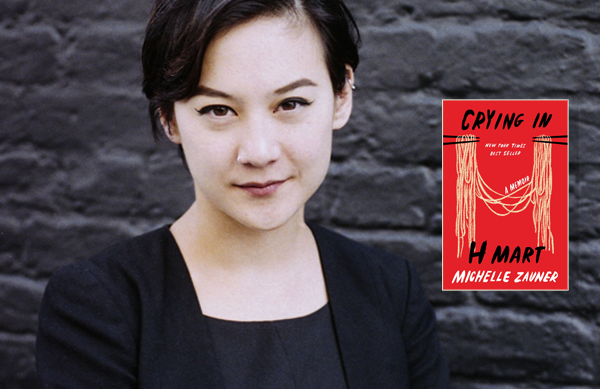 Click here to watch the recording (access ends July 14)
Originally scheduled for 5/18/22, this program has now been moved to 6/30/22 @7pm.
Join us for an evening with musician and author Michelle Zauner as she discusses her music career and her beloved bestselling memoir, Crying in H Mart. Jessica Hopper joins her in conversation.
Michelle Zauner is best known as a singer and guitarist who creates dreamy, shoegaze-inspired indie-pop under the name Japanese Breakfast. She has won acclaim from major music outlets around the world for releases like Psychopomp (2016) and Soft Sounds from Another Planet (2017). Critically acclaimed Jubilee (2021) is currently nominated for two Grammy awards. Crying in H Mart is her first book.
Jessica Hopper is a music critic, producer and author based in Chicago. In a career spanning more than twenty years, Hopper has earned acclaim as a provocative, fearless music journalist. She has written for, among others, GQ, Rolling Stone, The New York Times Magazine, The Guardian, Elle, and the Chicago Reader. She is the author of The First Collection of Criticism By A Living Female Rock Critic and co-founded Golden Teapot, a production company specializing in music and culture documentary work,